T Sport Racing is back on track!

At Easter, T Sport Racing started into the 2018 racing season. After 4 months of winter break allowing the team to find new partners – namely Haugg Kühler, Trux and SignDezign – and to strengthen and intensify the existing partnerships, the whole team was excited to be back on the track as the season started off at the British Easter truck racing event at the famous Indy Circuit at Brands Hatch! The opening round of the British Truck Racing Championship was scheduled for East
48 Ansichten

Terry Gibbon on the podium!

It has been a fantastic first season for Terry Gibbon and T Sport Racing in the BTRC! Terry managed to get onto the podium in the final race of 2017 - a great finish to the vear! A full race report will be published tomorrow! #BTRC #TruckSportUk #TerryGibbon #BrandsHatch
10 Ansichten

Not long now until we race at Brands Hatch! Advance adult tickets are just £19 until midday on Wednesday (£25 on the gate) - under 13s go FREE! http://bit.ly/2zbRSmV #BrandsHatch #TruckRacing #TSportRacing #BTRC #TerryGibbon #GrandFinale
10 Ansichten

Check out the latest version of the timetable for this weekends´ grand finale at Brands Hatch! #BrandsHatch #Timetable #BTRC #TSportRacing #TerryGibbon
3 Ansichten 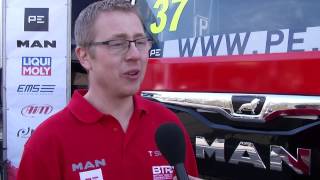 The TV programme from the 1st round at Brands Hatch is now online available to watch! Have a look here: https://youtu.be/XSpYMd5R_Ro #TerryGibbon #TSportRacing #TV #BrandsHatch #TruckRacing #BTRC
14 Ansichten

Great start for T Sport Racing into the 2017 BTRC season!

The British Truck Racing Championship (BTRC) opening round at Brands Hatch on 25th-26th of March was a full success for T Sport Racing! The new team attracted the attention in an impressive manner and got great feedback from the people in the paddock. Numerous fans came to follow the action close up! Two training sessions and a qualifying were scheduled for Friday afternoon; Terry Gibbon´s first chance to take his newly built MAN race truck onto real racing tarmac for the ver
211 Ansichten

A successful first outing for T Sport Racing at Brands Hatch. Minor problems which need to be sorted out, but the team is very pleased with how the first race weekend went. A full race report will follow shortly! #BTRC #TSportRacing #BrandsHatch #BTRC2017
11 Ansichten

Successful day here at Brands Hatch for the opening round of the BTRC! All up and running and ready for tomorrow, Terry is looking forward to getting to grips with his new race truck! Check out the picture of it´s first maiden track time! #BrandsHatch #BTRC #TSportRacing #Unit8MotorsportSystems
10 Ansichten

WE ARE READY TO RACE!

Over the past 4 months, a new British truck racing team has been founded and established: Terry Gibbon fulfilled his dream of returning to the British Truck Racing Championship with his own race team – namely T Sport Racing. Together with the Unit 8 Motorsport Systems crew, he built a completely new class A race truck. At first, the idea was to build an American truck. After signing a partnership agreement with PE Automotive, one of the leading producers on the independent af
31 Ansichten